Editor’s note: It has been a year since the Narendra Modi government rolled out the Goods and Services Tax (GST), on 1 July, 2017. The introduction of the indirect tax regime marked the end of over a decade of wrangling, when politicians struggled to build consensus across party lines. Firstpost is publishing a series of articles wherein experts will analyse the triumphs and the pitfalls of the roll out of the GST. 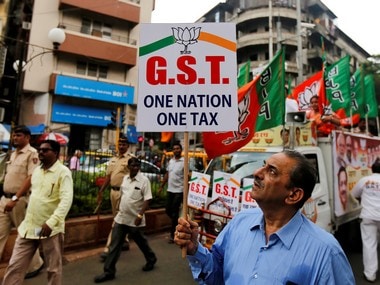 The advent of the Goods and Services Tax (GST) from 1 July, 2017, was one of the crucial reforms in the history of the Indian economy since the country’s independence. The overall process of implementation was viewed as an uphill task. Now with the first anniversary of this landmark reform around the corner, it is pertinent to study the impact of GST on businesses as well as on the economy as a whole. At this juncture, it will also benefit all stakeholders to identify the pain points in the implementation of GST, along with suggestions for its improvements to make it a ‘success’.

GST has subsumed almost all indirect taxes at the Central and state levels, thereby reducing the multiplicity of taxes. This has helped in creating a simplified tax regime to promote ease of doing business. At the initiation of the new regime, there were concerns about the likely impact of GST on inflation. However, food items with a larger weightage in the CPI basket were seen to be largely exempted from GST, leading to a minuscule impact on CPI inflation. The integration of the unorganised sector can also be seen as another major achievement of GST implementation.

From the fiscal perspective, GST is expected to expand the tax net in the long run, resulting in increased tax revenue. This would lead to strong government finances.

The GST collection mark of over Rs 1 trillion, for the first time for April 2018, points towards a positive trend in GST revenue collection. Moreover, the introduction of GST and the e-way bill will reduce the time and cost for the movement of goods across the country, benefiting the logistics sector as well.

The introduction of GST that led to a substantial system migration, brought along some teething issues and short-term disruptions among businesses across the country. In the initial phase, GST had its share of implementation challenges such as filling tax returns, securing timely refund of duties, and technical glitches related to the GST portal.

The requirement of filing multiple returns every year, coupled with multiple GST rates, added to the confusion and complications of running small businesses.

In view of these technical bottlenecks, the GST network has worked proactively to resolve certain issues, such as the electronic filing of letters of undertaking (LoUs) and automatic adjustment of tax liability with credit or cash. However, problems like slow response rates and errors faced around due dates for filing returns still remain, and need to be resolved to provide respite to taxpayers.

Besides, refunds under GST have remained a key concern for businesses. Many exporters were unable to file refunds for input tax credits, which adversely impacted their cash flow. To address this concern, the government had organised a special refund fortnight drive in June 2018 to clear pending applications for GST refunds.

In view of the implementation challenges of the new tax regime, the GST council has been working towards simplifying various laws and procedures as well as rationalising tax rates. The GST council has already reduced rates for more than 175 items. Further, the GST panel has identified almost 180 issues and put forward its suggestions before the GST Council.

Some of the key suggestions include single registration for a taxpayer across India, change in the definition of ‘supply’ under Section 7 of the CGST Act, cutting off input tax credit from the negative list, further simplification of return filing, and the inclusion of petroleum products under GST. So far, the government and the GST council have been proactive in resolving the issues faced by businesses in terms of a new tax regime.

Yet, a few gaps continue to remain that the government and the GST Council needs to bridge for the ease of doing business and for achieving a simplified tax structure.

Read the other articles from the series here:

One year of GST: It’s been a bumpy ride for the restaurant industry over the past 12 months

One year of GST: Indirect tax regime is a great success; has led to growth in GDP, says Adi Godrej

One year of GST: Tax regime is anything but good and simple; govt can simplify it to improve ease of doing business

One year of GST: Integration of unorganised sector is major achievement; govt must ensure transmission of lower taxes to consumers

One year of GST: Government could push a raft of anti-evasion measures if compliance or collections dip

One year of GST: The tax regime is helping reduce shady realty transactions, but property prices aren’t down

One year of GST: The roller-coaster ride is over and businesses are now prepping to switch to cruise control

One year of GST: With compliance at 69%, tax collections have begun to stabilise; time to make process smooth

The Only 10 Basics Stylists Recommend

‘Nothing performed to deal with unemployment, financial slowdown in 60…