National Herald reassessment case: CBDT tries to give a disingenuous spin; all you need to know about the controversy


In 1938,  National Herald (NH) was promoted by free India’s first Prime Minister Pandit Jawaharlal Nehru and a clutch of other Congressmen and women to give Congress a mouthpiece that would instil in its readers a fiery national spirit. Sadly, its circulation and advertising revenue dwindled so much so that it had to stop its publication in 2008. But in the meanwhile it had come to acquire an envious portfolio of real estate including the prime NH building in Delhi’s Bahadurshah Zafar Marg apart from the ones in Panchkula, Lucknow and Mumbai thanks to state governments’ munificence in allotting land to newspapers at throwaway prices on the ground that newspapers are purveyors of news and makers of public opinion and not profit-making bodies.

The Congress Party, more specifically the All India Congress Committee (AICC), had tried to bail out the beleaguered Associated Journals Ltd (AJL) by extending it an interest-free loan of Rs 90 crore which it failed to repay. Indeed, this was the genesis of the whole saga of NH cases—criminal and income tax reassessment. Against this backdrop let us understand what happened to NH and the key personalities in the Congress Party in a question answer format.

Q: What was the criminal case filed by the BJP MP Subramanian Swamy that led to the Congress President Rahul Gandhi and his mother Sonia Gandhi being convicted?

First, the AICC being a political party enjoying income tax exemption had no business to lend money even to its own mouthpiece. Second, the borrower namely, Associated Journals Ltd (AJL) that ran National Herald had become a real estate company, deviating from its main object of incorporation—publishing newspaper. In fact, it was conferred the not-for-profit status on the grounds of which it also got income tax exemption. Its forays into real estate not only belied its not-for-profit character but also tantalized the Gandhis into usurping it. Thus a devious plan took off. And this was the third criminal act, the most serious one that attracted the ire of the trial court. 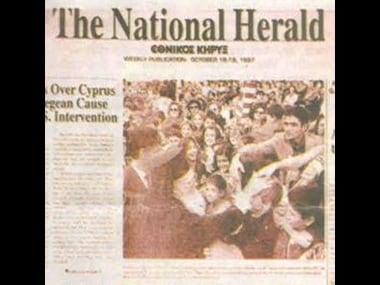 A closely-held company (a company which is strictly a family affair with a couple of friends from the charmed circle thrown in) called Young Indian (P) Ltd (YI) in which Rahul Gandhi and Sonia Gandhi owned 76 percent equity took over AJL, again a closely-held company, for a paltry sum of Rs 50 lakh. AJL shareholders, all from the Congress, didn’t demur to this hijacking of considerable real estate, estimated to be worth a whopping Rs 2,000 crore at that time. In return, AJL was let off the hook i.e. the AICC benignly agreed to waive the loan of Rs 90 crore.

The bottom line was:
1) The Gandhis came to lord over considerable prime real estate estimated to be worth Rs 2,000 crore by investing a paltry sum of Rs 50 lakh;
2) The Congress Party lost Rs 90 crore from a business it was strictly prohibited from dabbling in under the terms of income tax exemption conferred to political parties;
3) The other shareholders of the AJL who didn’t find place in YI were shortchanged but they took it in their stride.

The trial court held the Gandhis among others guilty, forcing them to seek bail.

Q: Why did the income tax authorities launch reassessment proceedings against YI?

The then Finance Minister P Chidambaram had brought a new anti-avoidance provision to the Income tax Act 1961 section 56 (2) (viia) w.e.f. 1 June 2010 (new provision) which sought to tax as income from other sources of a closely-held company the difference between the market value of the shares received by it from another closely-held company and the consideration actually received by the latter. This squarely covered YI and hit Gandhis.

With AJL real estate then estimated to be worth Rs 2,000 crore at a conservative estimate, the Income Tax Department launched reassessment proceedings against YI relating to the assessment year 2011-12 for acquiring the formidable portfolio of real estate for a song (Rs 50 lakh) and not disclosing it in its income tax return. The department said the market value of shares vested in YI by NJL was worth Rs 2,000 crore given the fact that shares always represent the value of underlying assets.

The Delhi High Court had given its thumbs-up to the reassessment proceedings when Young India sought its intervention to quash them. The Supreme Court, on appeal, too permitted the department to proceed with its reassessment but subject to its decision when its appeal is heard on 8 January 2019.

Q: Having launched reassessment proceedings, why did the CBDT find it necessary to shoot itself in the foot through its 31st December 2018 circular?

The CBDT issued a circular on 31 December 2018 apparently in an effort to contain the damage cause by the new provision saying that it could be invoked only when there was a transfer of shares and not when capital was contributed afresh. It was obfuscation at its worst trying to mix up issues to pull wool over eyes of people. The disingenuous attempt was to say that since there was no transfer of AJL shares but only its takeover by YI, the new provision couldn’t be invoked.

Without getting into the polemics of the issue, the CBDT obviously courted infamy by dancing to someone’s tunes and worse having the audacity to believe that its circular would influence the SC verdict in its favor. The orchestrated attempt was a belated attempt to derail reassessment. In law what matters is the substance and not form. The substance of transfer of control from AJL shareholders to YI shareholders was clearly to benefit a tight clique of people. The bottom line was YI’s considerable real estate landed on the laps of the Gandhis though not directly but through their shareholding in AJL through YI. And all that they had paid for this largesse was peanuts—Rs 50 lakh. Thus the new provision was squarely attracted.

On 4 January 2019 the CBDT, without batting an eyelid but sounding distinctly sheepish, withdrew its 4 day old circular on the ground that the matter was subjudice! In the past, the CBI has been alleged to be dancing to the tunes of its political masters. It now turns out that the CBDT allowed itself to be manipulated by those facing the heat of the tax administration’s reassessment proceedings. Thank goodness the mischief was nipped in the bud thanks to the alert Modi government which reportedly rapped the CBDT on its knuckles.

(The author is a senior columnist and tweets @smurlidharan)

Firstpost is now on WhatsApp. For the latest analysis, commentary and news updates, sign up for our WhatsApp services. Just go to Firstpost.com/Whatsapp and hit the Subscribe button.